The purpose of this study was to examine the impact of an online training technology on the implementation of mand training on three paraprofessionals. Mand training is an evidenced-based instructional procedure used to increase functional communication in students with disabilities.

During baseline the experimenter observed and recorded during one-to-one instructional times. During training, the paraprofessionals were given a username and password to login to the Autism Training Solution, Relias Learning. (Reliaslearning.com). The system had them do a pretest and then took them through a series of video modules, each ending in a competency quiz. After they passed the competency quizzes, they were able to take the post-test to finish off the training. 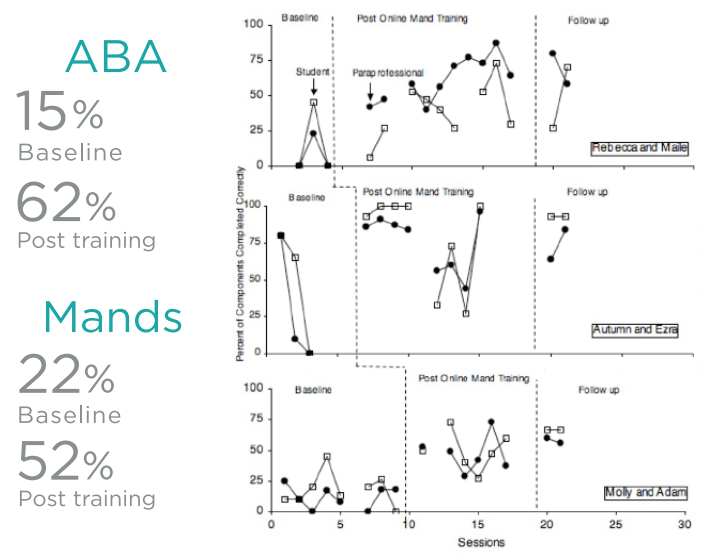 Education and Training in Autism and Developmental Disabilities March 2013

With the number of students with autism and related developmental disabilities increasing and a lack of trained professionals, solutions are needed to provide training on a large scale. Alternative training approaches need to be developed so that paraprofessionals can access training in an efficient and effective way. One such possibility is online training. A multiple baseline design across participants was used to evaluate the impact of online training videos (OTV) on the implementation of mand training with three paraprofessionals in a public school setting. The three paraprofessionals were of Hawaiian ancestry, ages 32, 34, and 42 years. Three elementary aged students with autism and developmental disabilities also participated in the study. They were ages, 6, 8, and 10 years, and also of Hawaiian ancestry. All participants lived in a rural area of Hawaii. After the OTVs, the percentage of correct implementation of mand training increased for all paraprofessional participants and maintained over time. Improvements in accurate teaching were also accompanied by increases in the rate of spontaneous manding by the students. Results support the use of online training as an effective alternative to inservice training for paraprofessionals.

Back To Resources
Next Resource

Is Your School/Agency Ready for RBTs?

During this on-demand webinar, we review factors to determine if the RBT credential is the best next step for your agency or school.

How ACT and OBM Benefit Your ABA Agency