As surprising as it may be, healthcare professionals don’t always treat each other with kindness and respect. In fact, research suggests that lateral violence in healthcare is a serious issue. Also referred to as horizontal violence or bullying, lateral violence is defined as non-physical, aggressive, hostile, and/or harmful behavior between coworkers. While individual acts of lateral violence can appear relatively harmless, they create a toxic environment that takes a toll on employees’ morale, hindering the success of the healthcare institutions for which they work.

Workplace bullying and lateral violence among nurses heighten tension within an already high-stress environment. To create healthier, more positive workplace environments, it is essential for healthcare administrators to take the time to truly understand lateral violence in nursing and the significant adverse effects it can have on patients and practitioners alike.

Who Are the Main Perpetrators of Lateral Violence in Nursing?

While anyone can engage in lateral violence, it is typically perpetrated by individuals who view themselves as superior to other members of their team. Organizational managers and directors are the most frequent perpetrators of lateral violence against nurses, making it difficult for lower-level nurses particularly, to report their abuse. However, nurses with the same job title also commit lateral violence against their peers. In these cases, it is typically the seasoned nurses who victimize those who are new to the profession or new to their organization.

When lateral violence is perpetrated by superiors or more experienced employees, victims are often uncomfortable reporting their abuse for fear of retaliation. Many feel alone, with no one to turn to for support. This silence further escalates an already pervasive problem.

Why Does Lateral Violence Occur in Healthcare?

There is no single explanation for the prevalence of lateral violence in nursing, but there are several theories on the phenomenon, one of which addresses deeply entrenched power structures within healthcare.

For decades, both hospital administrators and patients considered nurses inferior to physicians. Physicians received all the praise, while nurses—whose skill and diligence directly improved patient outcomes—were kept behind the scenes and often disregarded entirely. Although we’ve seen a shift in this mentality in recent years, it has not been completely eradicated. As a result, many nurses continue to feel powerless and undervalued, leading to significant internal frustration. Some researchers believe that lateral violence is the outward expression of this frustration.

The theory of ethical relativism is another plausible explanation for the prevalence of lateral violence between nurses. This theory asserts that the perceived morality of an act is influenced by the culture in which it occurs. Subscribers of this theory believe that lateral violence has been present in nursing for so long that it has become an ingrained part of the nursing culture. Those who engage in bullying may not view it as immoral, but rather as a rite of passage and an exercise that builds resilience—essentially a form of hazing. When a workplace culture normalizes lateral violence, it can be difficult for individuals to see how toxic it truly is.

Many believe that the stress associated with nursing also contributes to lateral violence. According to a recent survey, 80% of nurses report having no time to rest and 75% believe that inadequate salary compounds their stress. Combined with the psychological toll of working in a high-pressure environment, these stressors may make nurses more prone to interpersonal conflict and lateral violence. As budget concerns and widespread nursing shortages persist, many practitioners fear that lateral violence will only escalate if organizations do not take direct action.

What Are the Implications of Lateral Violence in Nursing?

Lateral violence in nursing has serious implications for victims and the institutions for which they work. These implications may be physical, psychological, or structural, and can include:

According to the 2017 Workplace Bullying Institute U.S. Workplace Bullying Survey, 40% of individuals who experience bullying in the workplace suffer adverse health effects as a result. Among hospital employees, these effects may manifest as cardiovascular disease, weight gain or loss, cardiac arrhythmias, musculoskeletal problems, insomnia, gastrointestinal disorders, and/or headaches. These conditions can lead to a surplus of unplanned absences and long-term sick leaves, leaving healthcare institutions even more short-staffed than they already are.

The Academy of Medical-Surgical Nurses warns that repeated lateral violence can lead to mental health disorders like depression among victims. Frequently reported symptoms of lateral violence include a decreased sense of well-being, negative self-image, and a poor world view. Victims also report symptoms consistent with post-traumatic stress disorder, including anxiety, insomnia, and suicidal behaviors. Unfortunately, it is not uncommon for victims to develop substance use disorders as an attempt to manage their pain.

Bullying significantly reduces job satisfaction and one’s sense of commitment to their employer, leading to a high rate of turnover within an organization. According to one recent study, approximately 60% of nurses leave their first job within a few months due to lateral violence. Given the current nursing shortage in the U.S., healthcare organizations can’t afford to lose such valuable members of their team.

Nurses are more likely to detach from their jobs when they become distressed from lateral violence and other workplace stressors. This detachment directly impacts their ability to address patients’ diverse needs and perform their jobs to the fullest extent possible.

Lateral violence also hinders productive working relationships by disrupting teamwork and communication between nurses. Without a strong sense of collaboration, organizations may experience an increase in medical errors and administrative mistakes that can compromise patients’ health and wellbeing.

According to the 2016 National Healthcare Retention and RN Staffing Report, the average cost of turnover for a bedside registered nurse is between $37,700 and $58,400. Additional research puts these costs even higher for more advanced nurses, claiming that it costs upwards of $92,000 to replace and train medical-surgical nurses and $145,000 to replace and train specialty nurses like those working within emergency departments or critical care units.

Even if nurses stay at an organization, lateral violence can still take a financial toll. According to one study, workplace turnover paired with reduced productivity and lost time as a result of lateral violence among nurses costs the healthcare industry an estimated $4 billion each year.

What Is an Example of Lateral Violence?

In her book, The Nurses’ Guide to Improving Communication & Creating Positive Workplaces, registered nurse and author Beth Boynton provides a clear example of lateral violence. In the example, Boynton shares the story of Mary, a nurse who joined the Emergency Department (ED) after 30 years of nursing practice.

Mary says she was frequently ignored or misinformed during her first two months of orientation, claiming, “I was a new face in the ED and was subject to criticism and disdain as if it were my very first day as a nurse. I would say hello to staff members and they wouldn’t answer.”

Mary continues by describing how her coworkers gossiped about her and even put her patients in jeopardy as a way to get her in trouble and make her “earn her stripes.” When Mary reported these incidents to her manager, she was told that they were aware of her coworkers’ behaviors and that she should stop being so sensitive. Mary quickly became depressed and began to dread going to work. She stayed at the job only because her family needed the income.

This example is one of many that speaks to the rampant culture of lateral violence within healthcare institutions. In an article for Johns Hopkins Nursing, nurse Ellie Falletta sums up the dangers of lateral violence as follows: “I have observed and personally experienced violence between nurses. Sometimes it was an eye roll when a question was asked, an incomplete patient handoff, or gossiping about a coworker. As harmless as that may sound, it is the small actions and inactions between coworkers that shake the moral integrity of a workplace.”

How Do Nurses Deal with Lateral Violence?

To appropriately address lateral violence, a nurse must first learn how to identify it. While the exact nature of lateral violence can vary between individuals and organizations, common behaviors include:

Dealing with lateral violence is challenging, especially in environments where such behavior is an accepted part of the culture. It’s up to organizations as a whole to address lateral violence and create a culture in which nurses feel comfortable reporting instances of bullying. If a nurse identifies even one of the above behaviors directed at themselves or others, administrators should encourage them to:

How Do Organizations Create a Safe Workplace?

While supporting nurses who report abuse is important, leaders must take their efforts one step further to create a positive, healthy workplace culture that prevents lateral violence from occurring in the first place. This can be accomplished through:

Managers and other leaders must commit to enforcing zero-tolerance policies and modeling positive workplace behavior. When leaders model positive behaviors, they are signaling to all members of their team that lateral violence is not tolerated.

Assess the Root Cause

Organizations can use behavioral and situational assessments to help determine the root cause of violence in their workplace. This information helps leaders create a more comprehensive framework for addressing lateral violence on a deeper level.

It’s important for all nurses (but especially new ones) to have a firm grasp on the signs of lateral violence. Training materials can help nurses better understand the differences between acceptable and unacceptable behavior and encourage them to report cases of abuse.

Nurses who feel that they are truly part of a team are less likely to engage in lateral violence. By emphasizing the importance of support networks and creating time and space for team building, organizations can help foster positive interpersonal behaviors among their staff.

Protect Your Team From Lateral Violence

Successfully reducing lateral violence in nursing requires an intentional culture shift, one in which employees at every level of an organization—from new hires to seasoned nurse administrators—must actively participate. Only when healthcare teams work together, learning how to identify, address, and mitigate lateral violence, will lasting change occur. 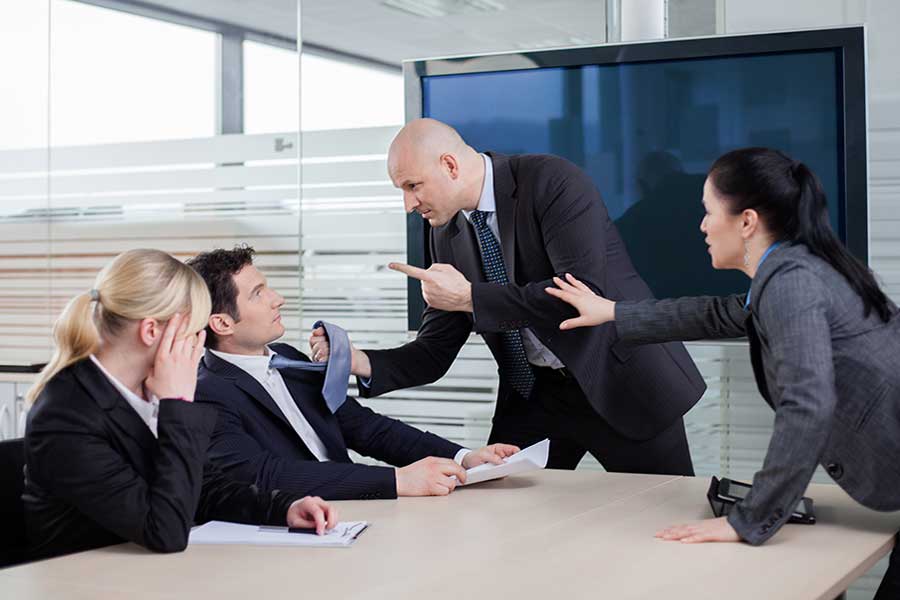 Relias offers an array of educational tools to aid healthcare professionals in their efforts to understand the dangers of lateral violence. With courses like “Preventing Violence in the Healthcare Setting” and “Do You Reflect a Positive Image of Nursing?” Relias helps organizations create the kind of positive workplace environments that eliminate lateral violence and improve patient care.

No Tolerance for Workplace Harassment in Home Care

Learn how to make sure everyone on your team understands how to recognize harassment in all its forms, how to report it, and what to do to help prevent it.

Healthcare workers face significant risks of workplace and horizontal violence. The effects of this can be devastating for those involved. Find out how you can address this in healthcare organizations.