On October 10, (World Mental Health Day), Dr. Christine Moutier, Chief Medical Officer at the American Foundation for Suicide Prevention and Dr. Christopher Reist, Professor in Residence at the Department of Psychiatry and Human Behavior at the University of California at Irvine, shared an overview on the current state of suicide in the United States. 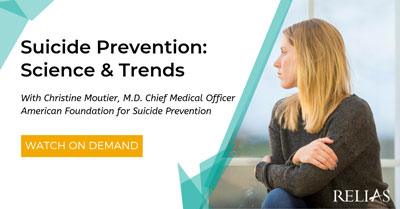 With over 500 attendees across a variety of health care settings, we received several thoughtful questions about how practitioners can implement suicide training, policies, procedures, and more at their organizations. Below are the top questions we received, answered by Dr. Moutier and Dr. Reist.

If you missed the webinar, you can watch it on-demand here.

14 Questions and Answers from the Suicide Prevention: Science and Trends Webinar

1. What does suicide exposure mean?

Suicide exposure refers to the situation when a particularly vulnerable individual with pre-existing suicide risk factors experiences the suicidal behavior or suicide death of a peer, like in the case of a youth in school or of a celebrity through stories in the media. The research is very clear about the elevated suicide risk this can introduce for vulnerable individuals.

2. What is the best universal screener for suicide?

This depends on the setting and patient population. Please see The Joint Commission’s Suicide Prevention Portal for recommended instruments and screening tools.

3. Can you talk about the role of schools?

Schools play a critically important role in the community “safety net for suicide prevention,” since school personnel, including teachers and other staff, have eyes on our youth for many hours of the day during the school week. Plus, they are communities and have a structure where teachers, administration, counseling offices and school psychologists can all serve in a coordinated fashion to detect risk and provide a way for students to receive support within and outside the school.

Please see the Model School District Policy on Suicide Prevention for more details and please provide it to any school leaders you know. It is considered the gold standard for helping schools develop their suicide prevention policies and procedures.

4. You mentioned the role of technology in treatment. Can you give some examples?

Technology is being used in numerous, promising ways related to suicide prevention. Some examples include:

5. Can you speak a little more on antidepressants and the increase in suicide?

After the FDA issued the “black box” warning in 2003 and especially in the lead-up to that period, there was a media frenzy which appears to have led to an unintended consequence of less diagnoses of MDD, less treatment of MDD with medications and without commensurate spillover to increased therapy referrals, and an increase in suicide attempts for the youth and young adult age populations in the U.S. Lu et al. BMJ 2014

6. What are some resources that school counselors could access?

The American School Counselor Association (ASCA) is a colleague organization of the American Foundation for Suicide Prevention (AFSP). A good resource is the Model School Policy for Suicide Prevention, which we worked on with ASCA, NASP and the Trevor Project. It includes template language for school policies on suicide prevention. There’s also this set of school suicide prevention resources.

7. Have you considered housing authorities as another viable location or source for identifying suicide since they have large consolidated populations?

Absolutely. There are many well-poised roles to help identify individuals who are struggling or suicidal.  Some examples include educating gun retailers, staff in animal shelters, and financial counselors. These were also considered as part of the analysis for Project 2025, which aims to bend the curve and reduce the national rate of suicide by 20% by 2025. But, to make the cut for inclusion in Project 2025, there needed to be at least some amount of research data that showed suicide risk reduction of a particular intervention that could be utilized in each setting.

8. When you use the term “lethal means removal,” are you mostly referring to firearms or are there other lethal means that come to mind?

Lethal-means restriction or counseling refers to making the home or workplace safe from all available lethal means. In a gun owning home, that definitely includes firearms storage outside the home or at least locking unloaded guns with ammunition either out of the home or in a secured, separate location from the guns. Guns can also be dismantled temporarily and locked up that way.

It also includes removing or locking up medications and other toxic substances, like bleach and others. Here is a training for clinicians called Counseling on Access to Lethal Means (CALM) that can provide more insight and information.

9. What can law enforcement agencies do to start an effective intervention program that will be accepted by police officers who tend to not want to deal appropriately with this issue?

There are numerous trainings and education resources available for law enforcement. One example is Talk Saves Lives, which is a in person one-hour suicide prevention education program that you can request from an AFSP chapter to deliver to a law enforcement organization. At AFSP, our chapters are delivering this to many law enforcement groups around the U.S. To find the nearest AFSP chapter, visit https://afsp.org/our-work/chapters/find-your-chapter/

There are also other models too, such as embedding a mental health clinician within the police unit.

10. What are your thoughts on educating high school students on suicide prevention?

High school students are now considered old enough to learn about suicide prevention when the curriculum content is designed by experts with safe language and messages for youth. It is also recommended to teach youth about depression and mental health.

11. What is a good way for a peer recovery specialist to promote suicide awareness and prevention?

They could start by inviting their local AFSP chapter to provide community education on suicide prevention and to request a Talk Saves Lives presentation.

12. Are corrections facilities more susceptible to having suicides?

Yes, suicide is a leading cause of death in jails and prisons. You can learn more about efforts in correctional settings to prevent suicide as part of AFSP’s Project 2025.

13. Where can I get more information on the other health factors that are part of the “perfect storm?”

If you bring AFSP’s one-hour education program to your site, the first half of the program focuses on this topic. The second half is on understanding the risk factors of suicide and what you can do if you’re worried about someone who may be showing signs.

14. It is well known that medication has serious adverse effects, including antidepressants, antipsychotics, etc., that are prescribed to patients who have attempted suicide. Some side effects of these medications include a more depressed mood and other mental illnesses. How do you reconcile prescribing medicine to patients who have attempted suicide, considering these adverse effects?

When used appropriately, medications can improve not only the primary psychiatric condition, but the suicide risk of patients as well. That said, some patients may have side effects in the early phases of treatment that should be closely monitored, like sleep disruption or agitation. It’s highly important to closely monitor and encourage communication with patients’ families, with you, or with the treatment team, particularly during initiation and changing doses. Primary care can also treat depression and anxiety very appropriately in most instances, if they use a model of seeing the patient back and evaluating the both the therapeutic and side effects, as they would when treating any health condition.