Some names have been changed to preserve the participants’ anonymity.

Since 1970, April has been recognized as National Autism Awareness Month by autism advocacy agencies and individuals. Originally launched by the Autism Society, its goal has been to promote autism awareness and “assure that all affected by autism are able to achieve the highest quality of life.” Within the last several years, however, many autistic advocates have made the shift to name it Autism Acceptance Month instead.

The alternate wording may seem slight, but for many autistic advocates and disability organizations, this change represents a monumental shift in our culture’s response to autism. The Autistic Self Advocacy Network (ASAN) has been framing April as Autism Acceptance Month since 2011 with the goal of representing autism as a natural condition within the human experience.

According to the Autism Society, this change “aims to foster acceptance to ignite change through improved support and opportunities in education, employment, accessible housing, affordable health care and comprehensive long-term services.”

But what are the views of autistic individuals themselves? We met with three young people with autism who give their thoughts on awareness, acceptance, and the future of autism advocacy.

The Importance of Autistic Representation

A large component of awareness and acceptance has to do with how we view autism in our society. The representation of autistic individuals in popular culture can greatly impact these efforts.

Young Huer (he/him) is a young person with autism and graphic artist. For Young, autism acceptance includes accurate representation of autistic individuals in the media. To this end, he’s been creating a graphic novel whose main character is a young girl with autism.

“The main character is inspired by my experiences, my personal life growing up,” says Young. “One of the goals I have for my story is to have more autism representation in the media. We need more lead characters.”

Andie Rhae (she/her), a young woman with autism, also sees a large connection between autism awareness and representation in the media. “A bigger issue may be how too much ‘general knowledge’ and ‘general awareness’ comes from books and shows and movies that aim more to ‘entertain’ than accurately represent non-neurotypical perspectives and experiences.”

Young also believes authentic representation should be more than just placing individuals with autism on a pedestal.

“A lot of times, people on the spectrum are idolized — or used as a way to build up hope and optimism, when we’re not necessarily always like that,” says Young. “We are just human. That’s the important part of any diversity or identity story — we are not that different.”

For some self-advocates, awareness of autism and its multi-faceted aspects is still critical. Felix Pittman (he/him), when considering acceptance versus awareness, says “I don’t think one can really exist without the other. If we are moving in the direction of acceptance, first there needs to be awareness — but not the very clinical, very stereotypical understanding of autism.”

“At first I was angry about not being diagnosed with autism at a young age because it would have meant I could change myself in order to not get bullied,” says Felix. “That’s not the answer though. The answer is creating awareness and acceptance of all presentations of autism so that people don’t discriminate against, bully, disenfranchise, and marginalize autistic people.”

“The autistic spectrum is pretty vast and varied,” says Andie. “Individuals have individual experiences. Not everyone with autism is emotionally illiterate or behaves according to a stereotype.”

How Can Organizations Support Autism Acceptance?

For the self-advocates interviewed here, supporting autism acceptance can include a variety of organizational activities.

For Young, he recommends that organizations support programs to help young people learn how to self-advocate. Young has participated in local youth disability advocacy programs such as the North Carolina Youth Leadership Forum (NCYLF), which he says was crucial in helping him learn how to advocate for autism acceptance.

“We just need more programs, like the NCYLF, so that at a young age, [people with autism] know they can lead their own life,” says Young.

It is also critical for organizations to include autistic individuals in all aspects of their work. “Organizations need to go beyond only supporting autistic employees, go beyond tokenism and performative representation,” says Felix. “Actually involve people with autism in the decisions being made and compensate them for their expertise.”

Andie recommends specific services that can help individuals with autism better self-advocate. “I have trouble with social media and telephones. It’s a source of enormous anxiety and frustration,” she says. “Free resources for autistic people who struggle to work with and network on social media could be helpful and might potentially carve a kinder path for voices on the spectrum that might otherwise be kept silent.”

“Organizations need to go beyond only supporting autistic employees, go beyond tokenism and performative representation,” says Felix. “Actually involve people with autism in the decisions being made and compensate them for their expertise.”

The Future of Autism Awareness

When considering the change to Autism Acceptance Month, Young says “I totally agree with autism acceptance over awareness. I think the main issue is we lack a society that trusts people on the spectrum to speak for themselves.”

In regard to the future of autism advocacy, Andie sees something beyond awareness or acceptance.

“If they’re going to debate words, maybe those words should evoke something deeper, fostering more layered understanding and empathy,” she says. “Maybe ‘Autism History Month’ or ‘Know the Spectrum Month’…words that could connote the positives of the diagnosis as well as the burdens and put more focus on leaders, scientists, authors, and others on the spectrum…who wove their own special insights and interpretations in our culture’s tapestry.”

Felix recognizes the importance of centering autism awareness around supports, not curing autism as some previous movements focused on. “Awareness for the sake of curing something is not the direction to move in,” says Felix. “Awareness needs to center around education on autism and its many presentations. There are just as many presentations of autism as there are people with autism.”

For Young, it goes back to storytelling. “If you have more stories where people on the spectrum are leaders, or we show that we are more than our labels, I think that’s really what will change society.” 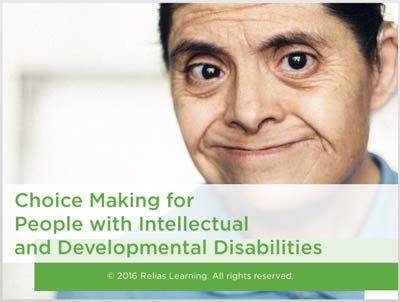 People with intellectual and developmental disabilities (IDD) continue to face barriers to participating as equal members of society. This course provides an overview of teaching and supporting the choice-making process for people with IDD.