In a previous blog post, the topic of turnover rates among direct support professionals (DSPs) was discussed. However, the past few months have seen the trend continue despite projected hiring surges in the health care industry. Unfortunately, this has a direct negative impact on people with intellectual or developmental disabilities (IDDs). But, if you learn to understand their key driving forces and relationship to different types of organizations, you can do something to help curb this trend.

The Direct Causes of High Turnover Rates Among DSPs

Many DSPs identify helping people achieve their hopes and goals as the top rewards in the industry of caring for people with IDDs, reports the Knoxville News Sentinel. Yet, the duties of DSPs are often characterized as “physically and emotionally draining.” But, a breakdown of this conception results in the following primary forces behind high turnover rates:

Funding sources are unavailable or exhausted

In 2014, the Tennessee Department of Intellectual and Developmental Disabilities increased the funding for each person served by 1.1 percent. Yet, the U.S. Inflation Calculator shows overall inflation stood out at 0.8 percent in the same year. In other words, the needs of people with intellectual disabilities were supposed to be met with a 0.3-percent increase. Meanwhile, the inflation rates in all forms of health care are growing even faster, reports Scott Gottlieb of Forbes magazine.

Resources for DSPs are unavailable or exhausted

Resources include programs designed and offered by some health care entities, such as psychological counseling for employees in high-stress environments, additional training to help DSPs perform their duties without risk of injury and benefits, which help reduce the long-term physical and emotional struggles of caring for those with IDDs.

More people with IDDs are living in group homes

Unlike a large-scale treatment facility, a group home creates a therapeutic, “home-like” environment for those with IDDs. Unfortunately, smaller facilities equate to fewer overall employees and reduced supervision of staff members, explains The Arizona Republic. In addition, the limited environment results in fewer promotion opportunities and problems with understaffing.

The wages of front-line workers in residential IDD and mental health facilities were an average of $22,150 annually, according to the U.S. Bureau of Labor Statistics, which reflects approximately $10 per hour worked. Comparatively, the average, annual wage of a worker in any occupation was $36,200. Meanwhile, benefits, such as health insurance and paid time off, are also rarely offered to DSPs.

These factors are not static; they can change suddenly. In addition, they tend to compound one another, creating what might be described as an “unsuitable” work environment. As a result, DSPs do not stay in their positions long. Of course, there are other less well-known factors that contribute to the problem.

For example, the average DSP is female and between ages 18 and 39. In other words, this demographic implies DSPs may leave their positions to become primary caregivers for their children and growing families. Unfortunately, additional studies on this possible driving force have yet to be conducted. But, there is another side to this story that deals with what types of organizations DSPs may be working for.

Nonprofit Versus For-Profit Organizations Caring for Individuals With Disabilities

There has been a long-standing stigma attached to people with IDDs. These people have been subject to institutionalization, and no one can forget the horrors Willowbrook. With time, federal and state governments have dramatically moved away from institutionalization toward group homes with an ever decreasing limit on the number of people who can live together. In addition, governments have not necessarily always paid for these group homes. In other words, the time was ripe for private organizations to step forward into the spotlight.

For-profit organizations are not necessarily bad. They had the resources needed to create the vast numbers of group homes required, and they were able to fully staff these facilities while processing paperwork for claims’ processing by the U.S. Government. In addition, for-profit facilities may offer services to people with an ability to pay out-of-pocket for care expenses, so the money trail is present. Unfortunately, for nonprofits the situation is much more dire.

Nonprofit organizations, as implied by their name, do not have the funding or other resources immediately available to expand their care settings or wages for employees, including DSPs. As a result, the wage problem among DSPs may be even higher in nonprofit facilities, explains Nonprofit Quarterly. Furthermore, some nonprofits may be forced to pay minimum wages to “stay afloat,” so the turnover rates will only decrease if wages increase.

Putting It All Together

There is a perfect storm brewing around caring for individuals with IDDs. Low wages, increasing demand for smaller-sized facilities and less institutionalization, a lack of benefits and unavailable employee-retention resources are driving high DSP turnover rates. Some progress has been made with states increasing the minimum wage, but changes take time to permeate an organization. In other words, the damage has already been done by leaving a distaste for working in these facilities for DSPs with training.

Unlocking the secret behind reducing DSP turnover rates is simple. Companies must reach out to existing and potential employees with better benefit packages, higher wages and resources designed to help them stay safe and healthy while working in this high-stress environment. This includes better training programs and training that is realistic, such as training programs available on smart, mobile devices.

Hopefully, the DSP turnover rates will decrease nationally, but the foreseeable future continues to look bleak. But, you can change it… 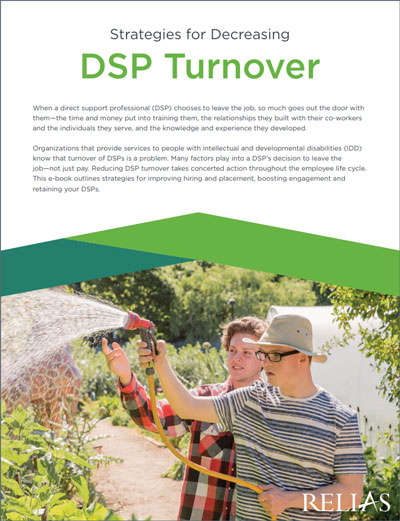 Creating checklists and sharing them with staff can lead to better supervision, better job performance and better employee morale.

Addressing the Other Causes of DSP Turnover

The average turnover rate for direct support professionals (DSPs) at organizations that provide services to people with intellectual and developmental disabilities is 45%. Here are the some of the reasons why.

What Makes a Successful DSP, and How Do You Find More?

What do you look for when interviewing DSP candidates? I’ve asked that question of providers across the country, and the same characteristics come up again and again…