To those who work in the medical industry, acronyms and abbreviations are nothing new. To the uninitiated, the venerable storm of alphabet soup may seem counter-productive; but ask a seasoned nurse, doctor, or anyone else who knows the joys of meticulously charting every second of every day, and you’ll likely be given an answer that is more along the lines of a love/hate relationship. It’s a lot to keep up with! Lately, you may have heard a new acronym: “MACRA.” It’s a big deal. But what, exactly, is it?

MACRA is an abbreviation for the Medicare Access and CHIP Reauthorization Act and, yes, it is an acronym that contains another acronym: CHIP, or, Children’s Health Insurance Program.

MACRA was passed in 2015 and is designed to be a fundamental change to the way different providers are paid under Medicare. At its core, MACRA is designed to replace the Sustainable Growth Rate (SGR) formula. SGR had previously determined Medicare Part B reimbursement rates for physicians with new methods of payments for care that stress cost-effective care as opposed to the number of services completed. To give some background, the older SGR formula was a rate-setting methodology that would attempt to adjust costs and expenses so as not to exceed the growth in GDP. While the formula was somewhat complex, its structure resulted in a trend that incentivized the delivery of health services. In other words, physicians were basing their care practices around the quantity of care provided, rather than the quality of care provided.

While it was passed in 2015, MACRA will begin taking effect in 2019. The years in between are being used as data-collection years to use as benchmarks. Moving forward, this data is what will set the standards of care, and how we will be measuring what “quality of care” actually means. Beginning in 2019, if a practice provides care that is above the standard of care, they will receive a positive, or upward, adjustment to their reimbursements. Practices that fall short of the mark will be assessed a fee, or penalty.

MIPS is a payment system that is based on 4 performance categories:

The degree to which a practice satisfies MIPS is measured by a score known as the MIPS Composite Performance Score. It is this score that determines if the practice will see a positive, neutral, or negative reimbursement adjustment. MIPS provides clinicians with the flexibility to choose which activities and improvements are most meaningful to their practice. The data submitted under the guidelines and reporting standards in MIPS determines how much the healthcare provider’s compensation for Medicare Part B reimbursements will be increased or decreased. Providers are eligible to participate in the MIPS track if they provide care to more than 100 Medicare patients per year, and bill more than $30,000 to Medicare. The provider must be a physician, physician assistant, nurse practitioner, clinical nurse specialist, or certified registered nurse anesthetist.

Alternatively, a practice may decide on a second route – the Alternative Payment Model (APM). An APM is a payment approach designed to incentivize both high-quality and cost-efficient care at the same time, based around preset care models. As of 2017, there are seven care models that qualify as an APM. An APM may apply to a specific clinical condition, episode of care, or patient population. There are also Advanced APMs, which allow practices and individuals to earn a higher reimbursement for assuming risk related to their patients’ outcomes. In fact, a practice or individual may earn up to 5% in incentive reimbursements by making improvements in the areas of patient care and participating in an Advanced APM (CMS 2017). However, if a patient’s outcomes fall below established benchmarks, the provider may end up incurring a lesser (or negative) reimbursement. It is important to note that practices will need to submit quality data required by their APM. If a practice or individual leaves an APM during 2017, they should ensure that they have seen enough patients or received enough payments through an APM to qualify for the 5% reimbursement bonus. If these thresholds have not been met, it may be necessary to submit MIPS data to avoid a downward reimbursement adjustment. It should also be noted that in light of recent natural disasters (hurricanes Harvey, Irma, and Maria) an interim final rule has been issued by CMS. Clinicians and practices that have been affected by extreme and uncontrollable circumstances can be automatically exempt from certain categories without having to submit a hardship exception application.

The Medicare Access and CHIP Reauthorization Act (MACRA) establishes new ways to reimburse physicians for providing care to Medicare beneficiaries. This is accomplished through two pathways: MIPS and APMs. MIPS involves four components, all rolling up into a final score. APMs are closer to traditional Medicare, in that providers are incentivized to treat a higher volume of patients through an APM and may represent greater or lesser reimbursement depending on patient outcomes. Data are to be collected and submitted, and reimbursements will be made based on said data at a later date. 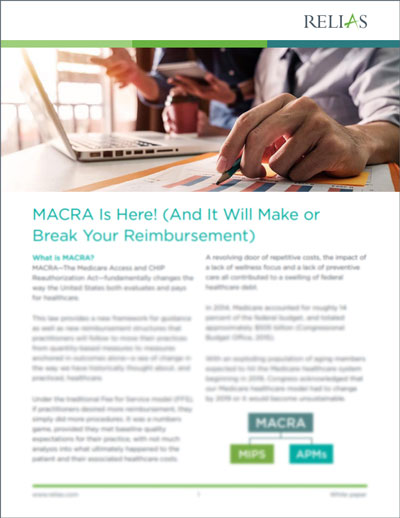 Helpful Resources to Prepare for MACRA

Our clinicians have developed a comprehensive, easy-to-digest white paper to help you navigate the ins and outs of all things MACRA.

If you work in behavioral health and you are stuck in “talking but not doing,” check out these three tips built on the MIT Change Model.

With more payments tied to performance and outcomes, Medicare is proposing that 90% of their reimbursements will be tied in some way to quality by the end of this year.